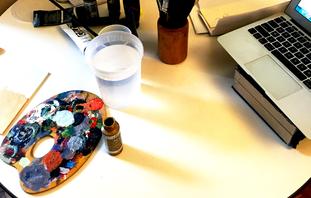 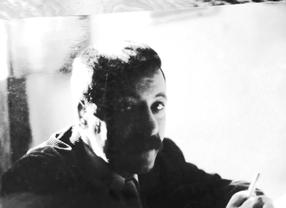 VITTORIO had decided he wanted to return to SOUTH AMERICA and travel by car to BRASIL.​

He discussed his idea with LUCIO, who was concerned about the revolution in NICARAGUA and was advised against taking this trip. Vittorio decided to go anyway.

He remained there for the next five years. When he returned to ROME, in 1984, he met SIMONE CARELLA, the director of the theater “ BEAT 72 “.

VITTORIO TERRACINA has had many solo and group exhibitions. He gained much of his inspiration from the company that he kept, i.e.: I. B. SINGER ( cousin of his first wife ), TANO FESTA, MARIO SCHIFANO, GREGORY NUNZIO CORSO, VICTOR CAVALLO, RENATO NICOLINI, ALBERTO GASPARRI, FERNANDO BIRRI.

He considers himself a writer, poet and painter.

VITTORIO now lives in NEW YORK with his wife CYNTHIA, his daughter THEODORA and his dog NUTELLA. His older daughter FIORE lives and work in LONDON.

He will continue to be a citizen of the world.

Born in 1951 in Rome, Italy to two Italian Jewish survivors, Vittorio Terracina's life was not simple. Growing up in Rome, at the age of 20 he began to create artworks of the graffiti nature on paper and canvas provided by his father's paper by weight store, using spray cans to develop abstract shapes and patterns.

While his artwork was initiated through simple measures, his extensive later travels brought inspiration that would further his work in the coming years.

Towards the end of the 1960’s he traveled all around EUROPE. Early 1970 he decided to move to LONDON where he remained till 1975. One year later he traveled through MEXICO, CENTRAL and SOUTH AMERICA (GUATEMALA, EL SALVADOR, PANAMA, COLOMBIA and EQUADOR).

​After spending time there he then traveled to INDIA and NEPAL.

At the end of 1978 he move to NEW YORK where he connected with the artist MARIO SCHIFANO and was introduced to his friend LUCIO MANISCO.